UNDP and Japan Hand Over IT Equipment to FSM Congress 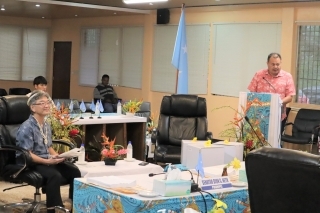 Speech by the Hon. Moses, Vice Speaker of the Congress 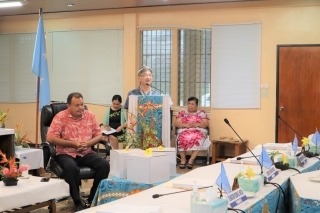 Speech by Ambassador Sobashima
On Tuesday 18 May 2021, IT equipment funded by Japan was handed over from UNDP to the Congress.

The handover ceremony was conducted in the Congress in Palikir, with the presence of the Hon. Esmond B. Moses, Vice Speaker of the Congress, H.E. Sobashima Hidenobu, Ambassador of Japan to the FSM, and Mr. Kevin Petrini, Deputy Resident Representative, UNDP Pacific Office, who participated from Fiji online.

The donation of the IT equipment was part of the cooperation of UNDP’s Strengthening Legislatures’ Capacity in the Pacific Islands Countries Project, or the SLIP, under way from March 2018 to December 2021 for the FSM, the RMI, Fiji, Samoa, Vanuatu and Solomon Islands, for which Japan committed 565 million Japanese Yen, or about 5.14 million US Dollars.

The SLIP for the FSM aims to provide the Congress with the IT equipment to enable it to hold virtual conferences, and to offer the technical cooperation for revising the Congress’s rules of procedure, and various briefing opportunities, among others.

Vice Speaker Moses, reflecting the challenges the Congress had faced due to the COVID-19 pandemic, explained the achievements of the virtual sessions of the Congress, and thanked UNDP and Japan for their assistance.

Ambassador Sobashima, explaining Japan’s support for the SLIP, congratulated the FSM Congress to have become the first Pacific legislature to convene virtual sessions, and hoped that the IT equipment handed over would further empower the Congress, contributing to the sustainable economic and social development of the FSM.

Mr. Petrini, representing UNDP, joining Ambassador Sobashima in congratulating the achievements of the Congress, also hoped that the IT equipment handed over would further empower the Congress. 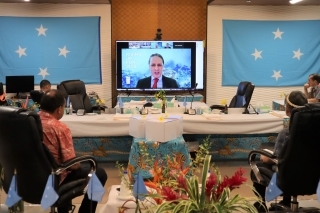 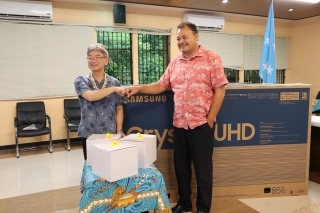 Handing Over IT Equipment 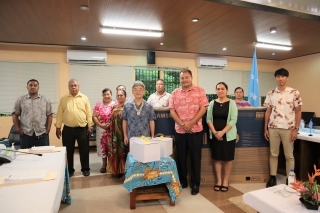 Those Concerned for the Project