Grant Contract Signing Ceremony for The Project for the Enhancement of Security at Pohnpei Port, Pohnpei State Speech by Chairman of the board, Pohnpei Port Authority, 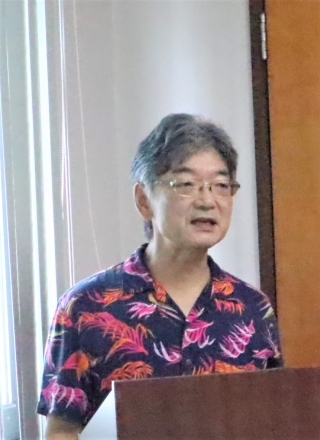 On March 19, 2021, the signing ceremony for The Project for the Enhancement of Security at Pohnpei Port, Pohnpei State was held at the Embassy of Japan to provide Pohnpei Port Authority, with the funds up to US$64,472 under the Grant Assistance for Grassroots Human Security Projects by the Government of Japan.

This project will construct a traffic monitoring facility equipped with exclusive lanes and sign boards as well as a certain sets of security cameras in the premises of Pohnpei Port Authority, so that it will improve and enhance the security and safety at Pohnpei Port, will ensure the safety of the residents of Pohnpei Island and will contribute to the prevention of various possible crimes, such as smuggling and human trafficking.

At the ceremony, the Hon. Francisco Mendiola, Chairman of the Board, Pohnpei Port Authority, expressed his appreciation to Ambassador Sobashima and the Government of Japan, mentioning that this project would protect the most vulnerable people subject to human trafficking and expressed the determination of Pohnpei Port Authority to ensure the better visibility and an extra layer of security through the implementation of this project.

Ambassador Sobashima Hidenobu stated that Pohnpei Port was an important venue for business activities, with the huge inflows and outflows of people and goods, and thus was susceptible to various possible crimes, including smuggling and human trafficking. He hoped that this project would proceed smoothly would improve the security and safety of Pohnpei Port and Pohnpei State. 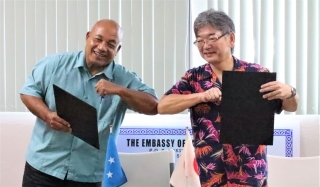 Handing over the big check

Group photo of the participants