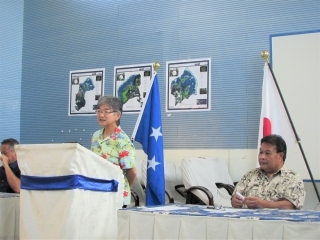 In the wake of the severe drought which hit Kapingamarangi Atoll, APIC decided to donate 20,000 US Dollars for the purpose of purchasing 8 units of 1,000 gallon water tank in Pohnpei Island and shipping them to Kapingamarangi Atoll. APIC is a private foundation based in Tokyo, whose aim is to strengthen relations between Japan and nations in the Pacific and the Caribbean. For the Federated States of Micronesia, APIC has implemented various development projects in the FSM as well as invitation and scholarship programs in Japan for both the leaders and the youth of the FSM.

The assistance by APIC to Kapingamarangi was decided upon the request from the Micronesian Conservation Trust (MCT) for the cooperation. Earlier this year APIC already donated through MCT also 20,000 US Dollars to Weno, Chuuk State, which had been severely affected by a drought, for the installation of 10 units of water tank.

At the ceremony, Mr. Kostka explained how this assistance had become possible, and about APIC. Governor Oliver appreciated and thanked the cooperation from Japan.

Ambassador Sobashima, having referred to the cooperation to the FSM both from the Government and private organizations of Japan, including APIC, introduced the message from Ambassador Peter Sato, President of APIC as follows: “We are pleased to work with the Micronesia Conservation Trust to help alleviate suffering caused by the droughts on Kapingamarangi and on Weno.
The 18 water tanks purchased and installed at the strategic locations will reduce the likelihood that the next drought will cause so much suffering.”

Ambassador Sobashima concluded that he hoped that the water tank placement would proceed smoothly, and the water tanks donated by APIC would develop to become another symbol of friendship between Japan and the FSM.