Groundbreaking Ceremony for the Project for Construction of New Recycling Center, Pohnpei State 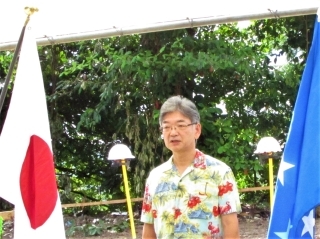 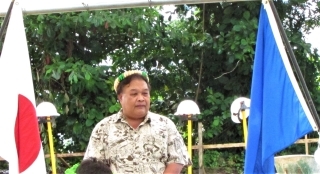 Speech by Pohnpei, Governor Oliver
On October 7, 2020, the Groundbreaking Ceremony for the Project for Construction of New Recycling Center, Pohnpei State was held at the project site at Dekehtik, Pohnpei State, commencing the project, under the Grant Assistance for Grassroots Human Security Projects by the Government of Japan, for which up to US$87,609 has been allocated.

At the ceremony, Mr. Kapilly Capelle, Public Affairs Officer, Pohnpei State explained that Pohnpei State Government had been collaborating with the Government of Japan to improve on Solid Waste Management for more than 10 years.

Ambassador Sobashima Hidenobu introduced that on the occasion of the FSM’s President Panuelo’s visit to Japan in November 2019, then Prime Minister Abe stated that Japan would strengthen its support to the FSM’s sustainable economic and social development, and that that he and EPA signed a grant contract for the Project for Construction of New Recycling Center, Pohnpei State, last March, and hoped the new recycling center would be able to collect a large number of cans properly, avoiding traffic and environmental problems existing at the current recycling center, and would nurture the culture against littering, and thus contribute to the sustainable economic and social development of Pohnpei State.

The ceremony was also attended by the Hon. Feliciano Perman, Lieutenant Governor of Pohnpei State, the Hon. Stevick Edwin, Vice Speaker of Pohnpei State Legislature, Mr. John Adolph, Iso Nahnken of Madolenihmw, and Administrator, Office of Transportation and Infrastructure, Mr. Henry Susaia, Executive Officer, EPA, among other officials of Pohnpei State and members of the Embassy of Japan in the FSM.