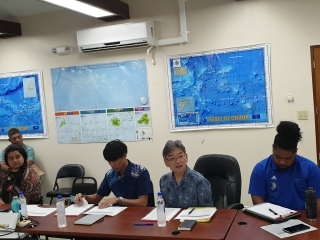 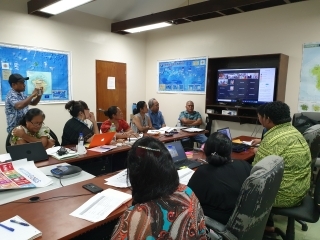 At the workshop
On October 6, Mr. Sobashima Hidenobu, Ambassador of Japan to the Federated States of Micronesia attended the workshop on “Gender Equality and Social Inclusion (GESI) in Disaster and Climate Change” held as part of the activities of the Enhancing Disaster and Climate Resilience (EDCR) Project implemented by United Nations Development Programme (UNDP) with the funds of upto USD 7.4 million provided by the Government of Japan.

The Government of Japan supports the Federated States of Micronesia (FSM) through the EDCR Project to enhance its capacities to respond to natural and climate-related disasters by procuring communication equipment to major emergency operation facilities, installing multi-hazard warning systems and climate data conduits at weather offices and State Governments, and providing Post Disaster Needs Assessments (PDNA) considering GESI, and training on Disaster Recovery Framework (DRF) and Disaster Management to Government officials, among others.

At the opening session of the workshop, Ambassador Sobashima introduced that Japan had been hosting WAW!, that is the World Assembly for Women, since 2014 for 5 times, as part of Japan’s contributions to achieve a Society where Women Shine, and that although due to COVID-19, the 6th WAW! scheduled to take place in April this year had been postponed, Japan still intended to continue to contribute to achieving a society where women shine.

In addition, he mentioned that only Japan had hosted the UN World Conference on Disaster Risk Reduction three times, and the Sendai Framework for Disaster Risk Reduction 2015 – 2030, stated, among others, that“Women and their participation are critical to effectively managing disaster risk and designing, resourcing and implementing gender-sensitive disaster risk reduction policies, plans and programmes; and adequate capacity building measures need to be taken to empower women for preparedness as well as build their capacity for alternative livelihood means in post-disaster situations”.

The workshop was held for three days on the 6th, 7th and 8th of October online between Department of Environment, Climate Change and Emergency Management (DECEM), State Governments (Pohnpei, Chuuk, Kosrae, and Yap), UNDP Fiji Office and the Pacific Community (SPC), attended by the Hon. Andrew Yatilman, Secretary and officials of DECEM, officials of State Governments, including those charged with public safety, UNDP, SPC, and NGOs, among others, and discussed various relations between women and disasters and climate change.

Click here to read Ambassador Sobashima's remarks at this event. 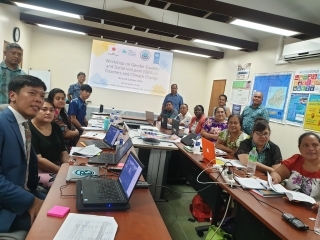