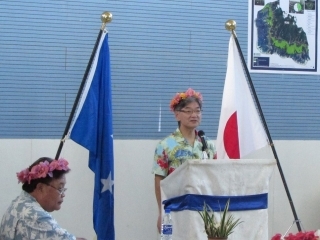 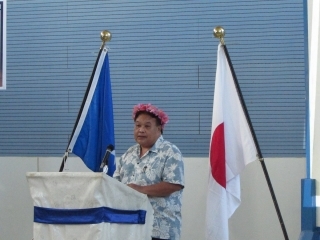 Speech by Governor Oliver
On September 23, 2020, a Handover Ceremony for FY 2016 Economic and Social Development Programme was held in Pohnpei State Government Building. Under this grant, 1 biological coagulation analyzer to the Department of Health Services, 2 water tank trucks to the Department of Public Safety, 2 wood chippers, one to the Department of Research and Development, and the other to the Environmental Protection Agency(EPA), and 2 dump trucks and 4 excavators to the Pohnpei Transportation Authority(PTA) were provided.
Japanese Ambassador Sobashima Hidenobu officially handed over these units of equipment to the Hon. Reed Oliver, Governor of Pohnpei State.

In his remarks, Ambassador Sobasima expressed his appreciation to the Pohnpei State Government for their efforts to fight COVID-19, and pointed out the 4 excavators donated had already been mobilized to construct quarantine facilities in preparation for receiving the Pohnpei citizens and residents from abroad for the first time since March this year, and hoped that other units of the equipment would aldo contribute to sustainable economic and social development of Pohnpei State.

The Hon. Reed Oliver, Governor of Pohnpei State, thanking Japan for other various  cooperation, stated that through the collaborative efforts of the Departments and Offices  of the States receiving the donated equipment, the people of Pohnpei would benefit greatly from these donations. He ended his remarks in Japanese to Ambassador Sobashima “Hontouni Domo Arigato Gozaimasu(Japanese words for thank you very much)”.

The ceremony was attended by the Hon. Lt. Governor Perman, Mrs. Suzanne Gallen Chief of Staff, Mr. Hubert Yamada, Director of Resources & Development, Mr. Patrick Carl, Director of Public Safety, Mr. Wincener David, Director of Health Services, Mr. Henry Susaia, Executive Director of EPA, Mr. Welson Panuel, Comissioner of PTA, and other members of the Pohnpei State Government, as well as members of the Embassy of Japan in the FSM. 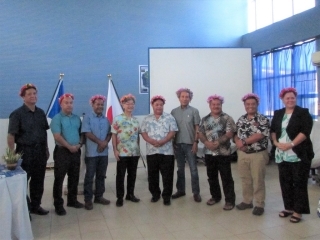 Group photo of the main participants