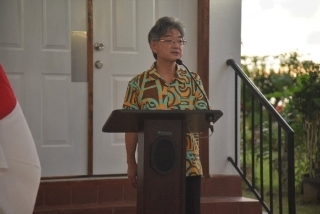 Speech by H.E. David Panuelo, President of the FSM
On February 19th ,2020, the first reception to celebrate the birthday of His Majesty the Emperor of Japan in the Reiwa Era (the era of the present Emperor) was held in the Federated States of Micronesia (FSM). The reception hosted by Ambassador Sobashima Hidenobu at his official residence was attended by H.E. David Panuelo, President of the FSM, the First Lady, Secretaries and other senior officials of the FSM Government, Representatives of Pohnpei State Government, Ambassadors and other officials of the Australian, Chinese, and the U.S. Embassies, representatives of international organizations, business people, and representatives of the Japanese community, among others, totaling more than 110 people

In his address, Ambassador Sobashima welcomed the guests who had come to celebrate the birthday of the Emperor, and, at first, admired the efforts to prevent the Novel Coronavirus disease in the FSM, explained the relevant steps taken in Japan, and hoped that we would win this fight against the new infectious disease soon. He then referred to the relations between Japan and the FSM, the importance of promoting the “Free and Open Indo-Pacific, and appreciated the facts that the Hon. Kono Taro, then Minister for Foreign Affairs of Japan visited the FSM, for the first time as the Foreign Minister of Japan in August, and that H. E. President Panuelo visited Japan twice, to attend the Enthronement Ceremony of the Emperor of Japan in October and to pay a bilateral visit to have a meeting with Prime Minister Abe, among others, in November last year, and expressed his determination to do his best to further advance the friendly and cooperative relations between the two countries, in cooperation with all the people present at the reception.

In response to the Ambassadors remarks, H.E. President Panuelo, at first explained that the restrictive measures in place against the Novel Coronavirus were intended to protect the lives and health of the people of the FSM, and requested understanding by the people present. Then the President shared his impressions of the Enthronement Ceremony of the Emperor of Japan, and celebrated the birthday of His Majesty the Emperor and wishied  His Majesty’s health and happiness. The President then referred to the history of Kizuna (strong bond of friendship) between the FSM and Japan existing more than 100 years, emphasized the fruitful results of the meeting with Prime Minister Abe, and looked forward to further development of the two countries’ friendly relations.

After the toasts, the guests enjoyed the conversations over the various foods and desserts prepared by the chef of the Ambassador’s Residence with such drinks as Japanese sake and wines. 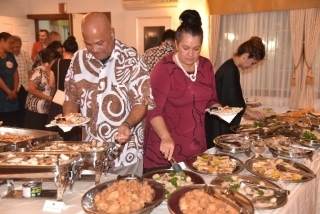 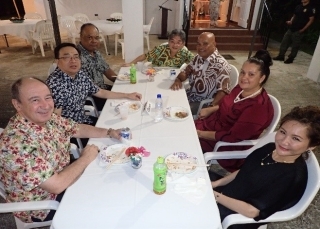 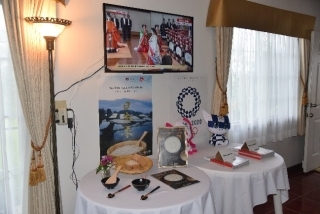